Review of Dreamworks How To Train Your Dragon Live Spectacular 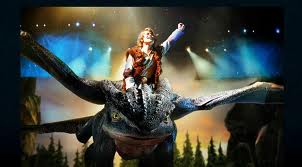 Out of my three children, it is the youngest who loves the movie How to Train Your Dragon the most.  She has the pajamas, a Toothless backpack with wings that Velcro onto the back, and has seen the movie at least 87 times.  There was a year (a whole, 365 day year) in which she “spoke” dragon more than she spoke English and would only answer to the name "Toothless".  She literally counted down the days until How to Train Your Dragon Live Spectacular arrived in Buffalo.

The day finally arrived, we had seats with a great view and she was in tears.  Sobbing is actually closer to the truth.  She had that face – you know the one – her eyes were closed, her face was red, fat tears were rolling down her face and her mouth was wide open. But no sound was coming out.  That is never a good sign because like the freakish withdrawal of the ocean from the shore right before a tsunami hits, that silence can only mean one thing: a gut-wrenching howl is about to burst forth and be impossible to contain.

But let me start at the beginning.

Closely following the movie, How to Train Your Dragon Live Spectacular follows the journey of a young Viking trying to win his father’s approval while remaining true to himself.  Breaking with a dragon-hunting tradition that defines his entire culture, Hiccup (the young Viking), first captures then befriends a dragon called the Night Fury.  The kids of the village are the first to follow Hiccup’s lead and form bonds with other dragons.  Eventually, united by a horrific mutual enemy, the entire village realizes that people and dragons can coexist.

I doubt I’ll shock anyone when I say that the dragons are spectacular!  Created by The Creature Technology Company in Melbourne, Australia, the dragons are technological marvels.  They are gigantic.  They are gorgeous. They are loud and they are complicated. Filled with microprocessors, hydraulic bits and pieces and 16 truck batteries, the dragons are animatronic marvels.  The dragons are sophisticated in another way as well.  They were thoughtfully designed and built with inticrite range of motion in order to allow for a wide variety of facial expressions.  Why is this important?  It helps the audience connect on an emotional level with these gigantic fire-breathing creatures. 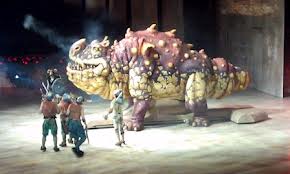 A clever element that helps the Gronckle (imagine a bumble bee that looks like a dragon) find fans with the kids in the audience is her tendency to burp smoke rings and “toot” confetti!

One of the very special aspects of this show is the fact that several of the dragons are rigged up to fly through the area of the arena set aside for the production.  They are graceful and elegant in the air and add a definitive element of excitement and awe to the show.

In fact, they are so graceful that I was initially concerned that some of the more thrilling moments of the story would be poorly represented.  I was worried for  nothing.  Breathtaking in its simplicity, the backdrop of the production is a massive screen utilized to work with the cast (human and animatronic) and add a depth of experience which would have been much less successful with a more traditional set. 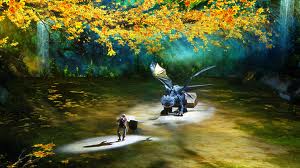 It’s safe to say that the projector scenes are my favorite aspect of the show.  Shown on a mammoth screen running the length of the stage area and rising close to the level of the light trusses, the screen serves as a versatile platform for every kind of background scenery imaginable.  When the story called for Toothless and Hiccup to plummet to the ground or enjoy a hair raising ride in the sky, the dragons didn’t speed up, the projected  scenery in the background did!  In another scene the Vikings are sailing into the volcanic mountain where the massively horrific Red Death dragon lives, the screen turns into this hot-looking, glowing lava lair that draws the eye in.  And in a positively marvelous moment, the screen becomes the colossal body of the angry “flying” Red Death.  AMAZING! 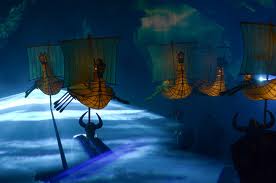 Not to be left in the dust, the lighting choreography (is that the right word?  It should be in this case) was a great way to create a few very magical moments.  It was used to conjure up a calm, blue sea for the Vikings to sail upon, partnered with bubble machines to evoke an ethereal underwater scene and with smoke machines to provide misty, moody atmosphere.  I can’t remember the last time I was so wildly swept away because of the lighting!

How To Train Your Dragons Live is a very big show – big spaces, big dragons, big action, big big big.  The nature of this results in very physically demanding roles for the actors in the show.  There are harnesses, breakdancing, dragon fighting and back flips.  It is clear that a tremendous amount of training went into the production and the cast was spot on.

For the performance that we saw, Rarmian Newton played “Hiccup” and Sarah McCreanor was “Astrid” (they share their roles with Riley Miner and Genna Nguyen).  Newton’s ” Hiccup” was less sarcastic and more endearing than the movie version and McCreanor’s “Astrid” reminded me of a Viking version of Tinkerbelle – slight and scrappy, graceful and tough.  I wish we had seen more of her throughout the show. 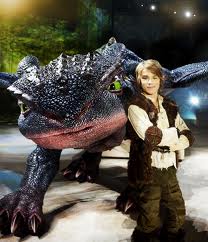 I was terribly impressed and exhausted after watching Newton in a scene in which” Hiccup” is trying to escape from the destruction of the village.  With animated scenes projected onto the screen, Newton navigated his way through a precisely timed and choreographed series of maneuvers with different visual perspectives while harnessed and in the air.  Most of the time his body was horizontal to the floor running, jumping, falling, climbing and swinging on the screen.   There is nothing I can say that will adequately explain this extraordinary scene.

Hiccup’s father,” Stoic”, is stridently played by Robert Morgan.  He was perfectly cast and was able to portray a man anxious about his son, his village, and the future.  He is more comfortable with the aggressive world of dragon hunting than he is in his role as a single parent to a child he doesn’t really understand.

His most trusted side kick, “Gobber”, is played by Will Watkins.  Working his way around stage with a prothestic leg and a hook as the most visible parts of his costume, Watkins treatment of "Gobber" is more steadfast and confident than his movie counterpart.  He is able to deliver the funny parts without making ”Gobber” look like a buffoon.

The twins, “ Ruffnut” and” Tufnut”, are played by Virackhaly Ngeth and Frace Luke Mercado respectively.  This breakdancing duo is a delight of well-rehearsed and beautifully timed gags and dance moves.  The only disappointment of the show was that their dragon, the two headed Hideous Zippleback, was not part of the show.  I’m guessing that a flying two headed dragon might have been too much to deal with from a technological standpoint.  It does give us something to look forward to in future productions.

“Fishlegs”, the bumbling character who gets to fly on the oh-so-adorable Gronckle, is played by Dexter Mayfield.  He was delightful to watch and if you are old enough to remember the character “Rerun” from a television show called What’s Happening you will be able to imagine the performance Mayfield delivered.

The obnoxious character, “Snotlout”, was played by Godefroy Ryckewaert.  Unfortunately, we didn’t get to see enough of Ryckewaert or his funny character.

All good things must come to the end, and once the rousing finale was over the lights came back up.  It was at this moment that my daughter’s face crumpled and the sobbing began.  The people who were sitting near us knew immediately why she was so devastated and treated her with sympathetic sounds and compassionate looks.

It was over and she didn’t know when she would ever see Toothless again.

The show is that good.

United States
Phone:716-855-4100
www.firstniagaracenter.com
info@firstniagaracenter.com
Sat, 09/22/2012
Sun, 09/23/2012
Thursday and Friday at 7 pm; Saturday at 11 am, 3 pm and 7 pm; Sunday at 11 am
$22 - $72
©2012, KidsOutAndAbout.com
Helena Robin ...is President and CEO of the Robin family. She coordinates and executes all family operations including (but not limited to) communications, transportation, management, catering, maintenance, troubleshooting, and cultural development. Her Executive Team is composed of a Husband/Creator of Chaos and three unpaid interns.
Web Service