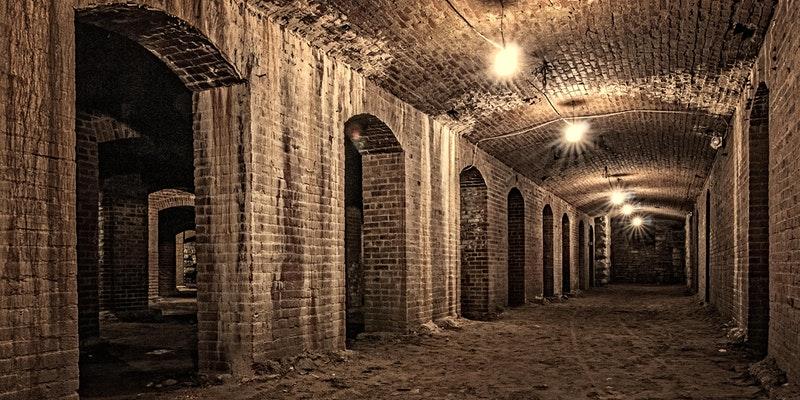 In partnership with Indianapolis City Market, Indiana Landmarks offers guided tours of an unusual site usually hidden from public view. These tours explore the Catacombs, a Roman-looking expanse of brick arches beneath the outdoor Whistler Plaza of City Market. Along the way, guides share stories of two historic buildings, City Market and Tomlinson Hall. The Catacombs qualify as both a ruin and a redevelopment opportunity. They’re what remains of Tomlinson Hall, an imposing building whose main hall seated more than 3,500 people. Dietrich Bohlen designed the hall and City Market in 1886. He also designed Indiana Landmarks’ Morris-Butler House. Tomlinson Hall burned in January 1958, turning Market Street into an icy lake as firefighters battled the blaze. The city took down the remains later that year and today an arch from the hall is all that remains above ground. Our Catacombs don’t have bones or crypts—at least none that we know of—but rather scores of brick barrel-vaulted arches that remain from what was the basement of Tomlinson Hall. Tours last approximately 30 minutes and depart from the mezzanine level of Indianapolis City Market, 222 E. Market Street, Indianapolis.
Click here for more information about this activity
Please help us keep this calendar up to date! If this activity is sold out, canceled, or otherwise needs alteration, email mindy@kidsoutandabout.com so we can update it immediately.
July 3 and 17
August 7 and 21
September 4 and 18
October 2, 16, and 30
TICKETS
The tour costs $12 per person age 12 and up; $10 per member of Indiana Landmarks; $6 per child (age 6-11); free for children age 5 and under (no strollers).
Secure your spot by purchasing tickets in advance via the form below, by visiting catacombs2021.eventbrite.com, or by calling Indiana Landmarks, 317-639-4534 or reservations@indianalandmarks.org.
A limited number of tickets accommodating walk-ups may be available, dependent upon existing reservations.
*****
Please note: City Market Catacombs are an undeveloped historic asset and are not accessible for all guests. The Catacombs feature a very rough, uneven dirt floor. The tour is not navigable for guests with walkers, canes, strollers, or wheelchairs. We recommend closed-toed shoes. Alert to people with breathing sensitivities: the Catacombs are a musty, sometimes damp area. Guests are required to sign a waiver of liability to take the Catacombs tour.
To help prevent the spread of COVID-19, the number of available tickets will be limited to allow for appropriate social distancing. All tour participants must wear a face covering over their mouth and nose at all times during a tour.

The Original Farmers' Market at the Indianapolis City Market

The Original Farmers' Market at the Indianapolis City Market

All Ages Adults & kids together Adults without kids