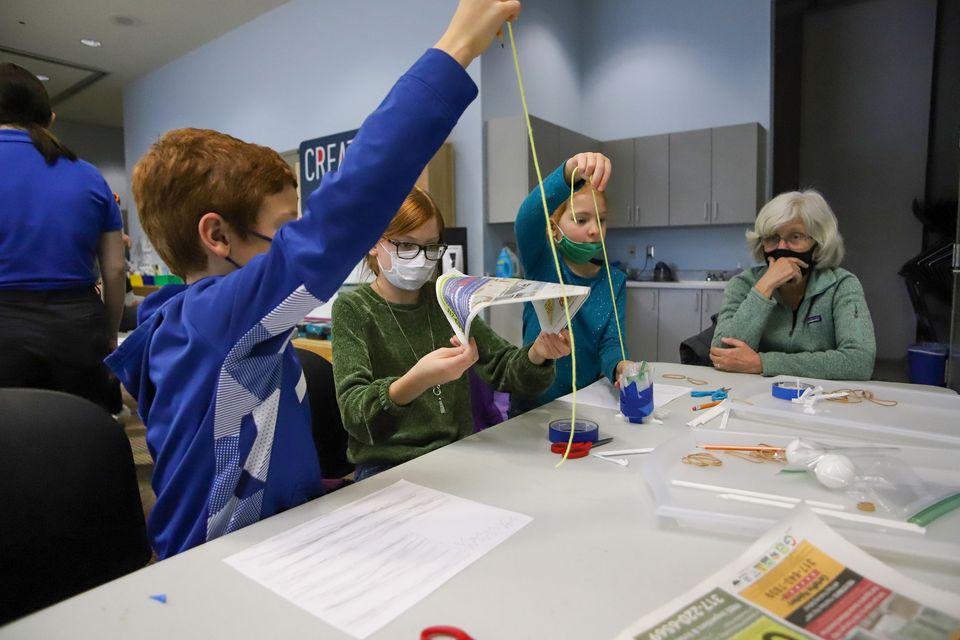 Let your child learn in the museum for a day during this two-hour class exploring different topics in science, art, history and culture. Adults join their learners for an interactive family experience. Tickets are $10/student, 25% discount for members.
Click here for more information about this activity
Please help us keep this calendar up to date! If this activity is sold out, canceled, or otherwise needs alteration, email mindy@kidsoutandabout.com so we can update it immediately.
SEPTEMBER – CODING
Learn what code is, then practice your coding skills on robots, Mars rovers, your own character, or a game.
OCTOBER – SPOOKY SPECIAL EFFECTS
Become a spooky special effects artist while creating a ghost, Foley sound effect and more.
NOVEMBER – TAKE ME TO THE MOON
Celebrate space by engineering a stomp rocket, create a lunar lander design to protect your astronauts and more while learning about an out-of-this-world adventure.
DECEMBER – SNOWFLAKE SCIENCE
Learn all about crystal structures, molecules and fractals while we take a closer look at snowflakes and prepare for chilly winter weather.
JANUARY – FINDING FOSSILS
Can you dig it? Become a paleontologist for a day and see what fossils you can dig up after visiting our Ancient Seas and Frozen Reign galleries.
FEBRUARY – CITY STRUCTURES
Decide if you’ll add a skyscraper to your city plan, build an architectural masterpiece and more as we explore architecture with a variety of hands-on activities.
MARCH – NATIONAL PARKS
Celebrate the anniversary of the National Parks Service, learn more about Indiana’s national parks and find out how you can be a conservation hero.
APRIL – MAJOR TAYLOR
Explore the life, achievements and legacy of Major Taylor, an Indiana sports hero. Learn how this Hoosier became an international champion cyclist at the turn of the century while also becoming a civil rights trailblazer.
MAY – ABSTRACT ART EXTRAVAGANZA
Create your own abstract art masterpiece after gaining inspiration from artists who turned the art world on its head.
Tickets
bit.ly/3sclY3R